” When you see three blazes near to a huge fir tree, turn left onto a smaller trail.”

Wise words. If it weren’t for the fact we’d seen about 10 triple blazed markings and the forest was full of big firs. Just a few hours into a 21 day trip, there’s no hurry, except that with 30ish kg packs our patience for taking wrong trails is fairly short. Getting to the snow is always the shittist part of a ski trip – as our leaden skis attached high on our packs get caught on overhead branches we stop to untangle each other. I close my eyes, slowly exhale and imagine the glorious snow ahead, the smooth slide of skins on spring snow crust. Soon.

Leaving the road, we were bubbling with stoke, regardless of how heavy the packs are or how bland the trail. Months of planning, catching up with fantastic mates who’ve flown around the world followed by a road trip our adventure is H-A-P-P-E-N-I-N-G. Hours after, we realise we’ve probably missed the crucial turnoff. Shoulders groan in protest. We hop over dryish patches in a smelly swamp for a second time, climbing back up the hill. Tottering over fallen trees, rigid ski boots and tall packs test our balance.

Not long after finding the right route – with no triple blaze in sight – we dump our packs on dank dry earth to settle down at our first camp and the stoke starts smoldering again. Mike is thrilled to build his first bear hang. Dave builds a fire. Henry goes for a run to find a dropped glove. Paul tends to his feet that are already self-destructing. Joane puts up the tent. I start cooking our first dinner. #camplife

Ridiculous amounts of effort has gone into reducing our pack weight. We’ve converted our ice axes to double as shovel handles, the four guys are sleeping in a three man tent – one in the vestibule – and the menu is meticulously planned to have an uber high calorie-to-weight ratio. As a result, I’m at least disappointed to find I’ve accidentally packed 18 extra tent pegs. Especially tragic as Dad just sent me four high-tech super lightweight titanium tent pegs from New Zealand. Huddled around the cosy fire we agree we’ve gone slightly overboard cutting weight – we’ve got no whiskey for the entire first week. 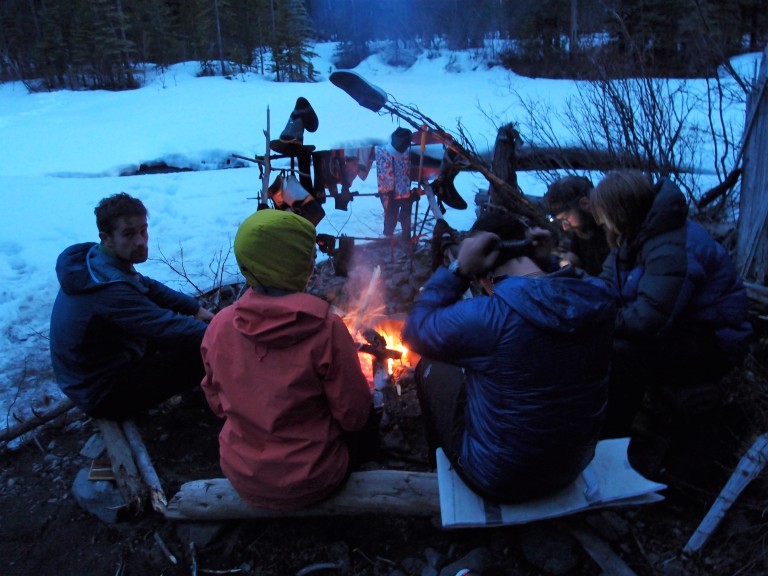 On the third day we wake up to our first proper ski day. The route ahead follows the Stikeline river, mostly frozen over with snow. At least some would interpret it that way – to us, it is a highway, an autobahn, a yellow brick road leading through the forest up to the mountains. Our skins glide swiftly, heavenly on the hard morning snow and we make exceptionally good progress – by lunch we’re seven ks up the river. Sitting in front of a magnificent frozen waterfall, the four guys are blown away by the dehydrated hummus. “How much did we bring?” Dave asks. Erm… “3.2 kg of powder so that makes umm….” Joane calculates. “10 1/4 kg of hummus.” Fortunately it’s super scrumptious.

Camp four is our last with a patch of dry ground for us to dine on. Ecstatic to hear via satellite text that our food packages are successfully in place – thrown out of a small Cessna aeroplane – we have the first serious decisions to make regarding the route. We’re trying to get to the Homathko icefield, but between us and and the icefield is a mountain range that’s significantly more dramatic than we expected. Marking different options on the map with symbols we find a route (named ‘☆’) that skirts the gnarliest part of the range. Regardless, the map is still dotted with ‘?’s – there are some fairly steep cols and descents ahead that are not really avoidable, and it’s hard to tell which ones are best. In particular, one steep south-facing slope (‘☾ ?’) a couple of days away screams out as crux.

The next days are terrific. We pass over four major glaciers and three divides. Each ascent is a pleasantly slow plod and each descent a satisfying slide. With heavy packs pushing the knee twisting danger high while skiing downhill, we set a firm rule in place. No falling: If a team member falls, they don’t get dinner that night. On a particularly long flowing descent from a col, we’re spread in a long line beside a glacier and- WHAM! – Henry hits the deck first, the rest of us lick our lips imagining the larger portions as a result WHAM! Joane hits the deck second.

On our fifth evening we approach the crossing named ‘☾ ?’ Paul arrives at the top first and we hear “YEEOOOOOOOOWW-PEEPEPEEE”. In front is a spectacular mountainscape of pointy peaks and smooth round glaciers. It’s our first sight of the Homathko icefield. All of the sharp mountains in sight are mostly drowned, just their tips managing to jut out of the the blobular ice. Glaciers ooze from the icefield down every valley in every direction.

The slope ahead has seen the sun for too long, the snow we intended to ski down is a weak watery mush. Two gigantic natural avalanches have already scoured half the slope. Trying to ski down would be self-sacrifice – we opt to bite the bullet and walk down a rocky ridge, then plan to follow the already avalanched sections of snow.

While waiting on the edge of a rocky prow, Mike and Paul start throwing rocks onto the snow slopes below, trying to release some avalanches. This is a technique often described in avalanche books, but needs ridiculously unstable snow to actually work. ” Holey woooow!” we get river-like slush avalanches up to two metres wide to release just by throwing stones.

Mike throws a wine-bottle sized rock and sets off a flow of snow about a metre wide. It goes a few tens of metres and “Cor!” widens to about 5-10 metres. It’s gushing now, with no sign of stopping going 50m, … 100m, getting slowly wider and wider then- “WHOOM,” cracks erupt from either side of the flow, spreading to 70m wide. The entire face forms a furious torrent of mush – it looks like whitewater. “CRAAACCCK! THWAAAACK!” It flattens trees in its path and steamrolls down the hillside out of view. At the very bottom of the slope in the distance is a large frozen lake. We see Mike’s personal avalanche flow out onto the lake and come to a stop. Looking at each other wide eyed, we’re not sure whether to believe what we’ve just witnessed.

Knowing that the snow is ridiculously unstable we decide to follow a second rock rib down to where it meets the already scoured snow. We start walking down the rib slowly with Mike’s avalanche path to the right then – “AVALAAAAANCHE”, David screams. The slope to our left releases and is a ferocious torrent of churning slush 20-30 metres wide. It flows on and on to valley bottom. “The snow released with no trigger,” we marvel. “–insanely unstable,” “holey fuck!”. The whole valley feels mid apocalypse. Despite the fact we’re probably mostly safe, it doesn’t feel like a good place to be, so we call a retreat. Back up the rocky ridge we go, slow with heavy packs – except Paul. Turns out he’s a monkey.

Back setting up camp having retreated to the previous glacier, we reflect on the moment of the second avalanche. “I’ve always wanted to yell AVALAAAANCHE sometime in my life” David confesses. Henry reveals that in the moment of panic he had noticed that a rock near him looked uncannily like tandoori chicken. We settle down to camp life, and as the wind whips up we all pack into the big three person tent for the evening. Our plan is to ski the same slopes early in the morning when they’re frozen solid and secure.

The next day brings a storm. Wind, rain and snow, so we wake late only to crawl 3m into the big tent to play cards. Starting the trip we had seven days of food and have now used up five. From us to the food packages it’s probably just one long day, but we can’t really afford to have rest days so we cut breakfast and lunch. With plenty of high-calorie milk powder, we sip hot milkies around noon while pounding out game after game of six player 500.

The four guys have strict sleeping arrangements. Being in the hole (the vestibule) is pretty shit – it’s cold, drafty and rains condensation. Each night they rotate bed places, so every forth night they have to endure the hole. We brought a tarp along, and Mike uses it to set up ‘the gypsy tent’, a makeshift inner-tent in the vestibule. It’s still drafty and cold, but at least longer rains inside. Unfortunately as Joane and I share a double sleeping bag it’s impossible for us to take a turn sleeping in the hole.

The next morning, long before the sun has a chance to reach the horizon we’re back up at the ‘☾ ?’ col, finding that the night was cold enough to freeze the snow solid and stable. What was mushy porridgelike shite is now a perfect skiing surface – within minutes we’re at the valley bottom, wizzing past the frozen avalanche debris of two days prior.

We pass huge crevasses, avalanche debris, moraines and lakes until there’s just one more large uphill skin to get to our food drop. With only a day and a half of food left, and slightly unsatisfied creaks and gurgles coming from our bellies this culinary destination is now firmly on our minds. Skinning through the heat of the day we fantasise about scoffing cheese, chips or olive oil. Paul has other dreams – he’s put his down booties in the food drop to save weight for this first part of the trip. With constantly wet, blistered feet he’s increasingly excited to wear them.

Passing over large glaciers, up to the icefield, we round a nunatak and traverse around an icefall. The food drop location lies just ahead. I can almost smell the cheese. We break into a flying V and whoop as we skin – almost running – the final few hundred metres towards the GPS point, excited to see the nine packages neatly waiting for us. Joane checks the GPS “…it’s here, the point is right here! ..” we look around, surrounded by a desert of perfectly flat white fluffy powder.

2 thoughts on “Homathko part I The apocalyptic approach”

This is a text widget. The Text Widget allows you to add text or HTML to your sidebar. You can use a text widget to display text, links, images, HTML, or a combination of these. Edit them in the Widget section of the Customizer.
%d bloggers like this: